The following article has outraged me by the blatant racism of an Asian lady who has been promoted on the grounds of making a lawful comment and allowed to share her views. Any white person who made a comment like hers would have been called a racist so why is different if you’re not white?

By Bhvishya Patel For Mailonline

The University of Cambridge has spoken out in support of one of its lecturers who was hit by a wave of abusive messages and death threats for tweeting ‘White Lives Don’t Matter’. Dr. Priyamvada Gopal, 51, who teaches in the Faculty of English at Churchill College, took to the social media platform on Tuesday evening to write: ‘I’ll say it again. White Lives Don’t Matter. As white lives.’

However the controversial message, which has since been deleted by Twitter, was met with a barrage of outrage, with many people responding both publicly and privately with death threats and racist abuse. A petition titled ‘Fire Cambridge Professor for Racism’ was also launched on the petition site change.org on Wednesday demanding that Dr Gopal be fired by the university for the comment. 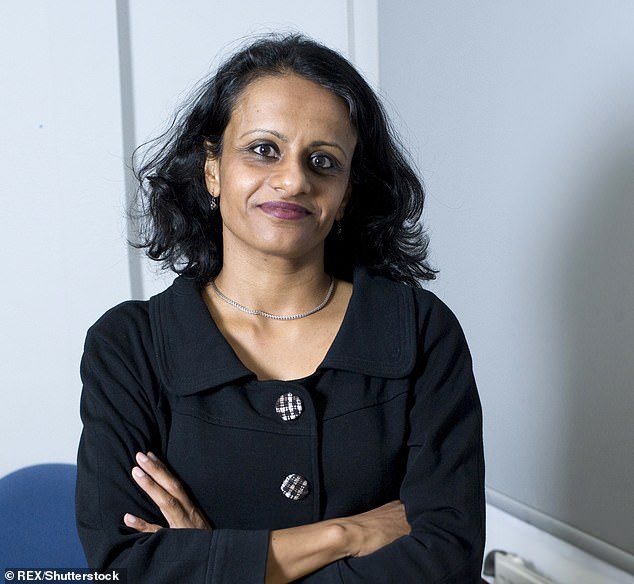 Dr Gopal later shared some of the hate speech she had received, including from a  man sending her a picture of a noose and writing: ‘We are coming for you you n***er loving piece of s*it’.

As well as sharing some of the worst abuse she has received, Dr Gopal who is also a journalist and activist announced that on Wednesday night, the university promoted her to a full Professorship. She added: ‘I would also like to make clear I stand by my tweets, now deleted by Twitter, not me. They were very clearly speaking to a structure and ideology, not about people. My Tweet said whiteness is not special, not a criterion for making lives matter. I stand by that.’

Following the torrent of abusive messages, the Russel Group University defended the academic and deplored the attacks she has faced since her tweet.  A statement released by the university read: ‘The University defends the right of its academics to express their own lawful opinions, which others might find controversial. [It] deplores in the strongest terms abuse and personal attacks. These attacks are totally unacceptable and must cease.’ 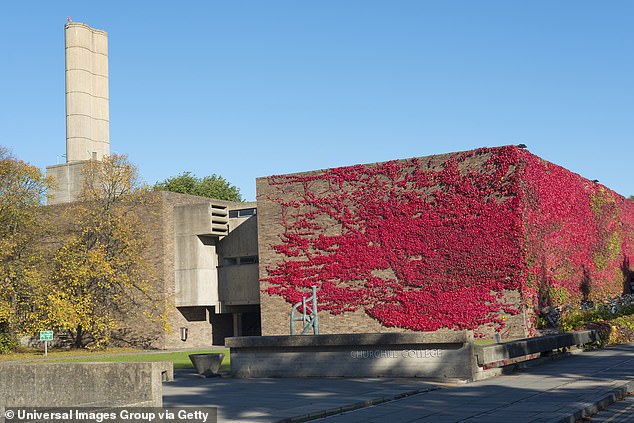 Cambridge University (pictured is Churchill College) said it defended the right of its academics to express their own lawful opinions, which others might find controversial

Dr Gopal later explained on social media that she was ‘clearly speaking to a structure and ideology, not about people’

Meanwhile, the Cambridge branch of the University and College Union (UCU), also showed their solidarity with Dr. Gopal. The union wrote: ‘Solidarity with Priyamvada Gopal being targeted with vile sexist and racist abuse for speaking up against white supremacists. We are proud to be your colleagues both on the picket line and off it. BlackLivesMatterSolidarity.’

Many colleagues and students have since expressed solidarity with Dr Gopal following the incident, with even popular comedian Nish Kumar wading in to call her ‘one of the best and brightest around’.

However, the university’s defence of Dr. Gopal has been labelled by some as inconsistent and politically biased. Critics have pointed to the recent removal of Noah Carl from his research position at St Edmund’s college over links with far-right extremist groups. And others have referred to the university rescinding a visiting fellowship invitation to controversial professor Jordan Peterson in March last year. Opponents of the university’s stance have suggested that the same defence of free speech and tolerance of controversial views was not extended in these instances. 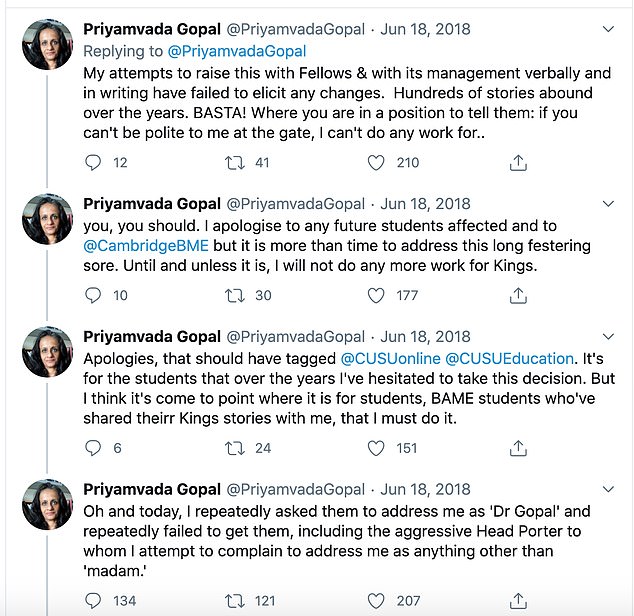 On June 18, Dr Gopal said that after 17 years of consideration she would not be supervising students at King’s College due to the consistent racial profiling and aggression by porters

The incident comes just a week after the academic announced she would no longer be supervising students from King’s College because of ‘consistently racist profiling and aggression by porters’.

On June 18, Dr Gopal told her 20,000 Twitter followers she was taking the stand ‘on my behalf and of other people of colour’ calling the situation a ‘festering sore’.

She said: ‘With deep regret but with 17 years of consideration behind it, I have finally decided on my behalf & of other people of colour @Cambridge_Uni to refuse to supervise any students at @Kings_College. ENOUGH IS ENOUGH of the consistently racist profiling & aggression by Porters.’

She added: ‘It’s for the students that over the years I’ve hesitated to take this decision. But I think it’s come to point where it is for students, BAME students who’ve shared their King’s stories with me, that I must do it. Oh and today, I repeatedly asked them to address me as ‘Dr. Gopal’ and repeatedly failed to get them to address me as anything other than ‘madam’.’

The academic went on to say that Kings’ porters treated her differently because she was not white. But King’s College hit back at her claims, saying there was ‘no wrongdoing or discrimination’ from its staff.

A King’s College spokesperson said: ‘We have investigated the incident and found no wrongdoing on the part of our staff. Every visitor was asked to show their card during the course of that day, as the College was closed to everyone except King’s members. Non-members such as Dr. Gopal were asked to take alternatives routes, around the College. This was a matter of procedure, not discrimination. King’s College is a rich and diverse community, and take the wellbeing of its students and staff extremely seriously. We remain committed to being an inclusive and welcoming environment in which to work and study. We categorically deny that the incident referred to was in any way racist.’

Any cookies that may not be particularly necessary for the website to function and is used specifically to collect user personal data via analytics, ads, other embedded contents are termed as non-necessary cookies. It is mandatory to procure user consent prior to running these cookies on your website.